A couple of years ago I saw some beautiful olive trees for sale at the Farmer's Market.  I had bought some citrus trees and blueberry bushes from the same  stand and planned to eventuallly buy some olive trees.  The couple selling the plants gave me their card.  When I went home I placed it on top of my Mahogany jewelry box next to the base of my silver Chanukkiah Menorah. Months had gone by and I didn't see the couple any longer at the Market.  I called them and they said they had   waited for my call  all these months.  They reserved two olive trees for me.  They said that just that week a man had asked for them.  I drove out to their beautiful place near Mt. Dora and bought the olive trees and had beautiful fellowship with them.

At home I thought about the vision Zekaryah (Zechariah) had about the two olive trees on either side of the menorah.

"Then the angel who talked with me returned and woke me up, like someone awakened from sleep. He asked me, “What do you see?”  I answered, “I see a solid gold lampstand with a bowl at the top and seven lamps on it, with seven channels to the lamps. Also there are two olive trees by it, one on the right of the bowl and the other on its left.”   I asked the angel who talked with me, “What are these, my lord?”   He answered, “Do you not know what these are?” “No, my lord,” I replied."           -Zekaryah 4:1-4

Zekaryah (Zechariah) didn't know either!  This verse caused some of the first scales to come off from my eyes regarding what we have been used to calling as Jewish is rather actually the Father's.

I was led to this verse years earlier, around 1999, when my beautiful daughter Sarah May at seven years old woke up from a dream and said she went to heaven in it.  In heaven she saw a beautiful candleabra that had many lights on it.  She said it was huge and that the middle light was suspended in the air on nothing, but that it had a bell cup under it.  She said the Father pushed the bell cup and everyone bowed to pray.  When she finished telling me the dream I asked her to draw the candleabra.  I looked to see if what my little seven year old daughter saw in heaven was talked about in the Bible.

Sure enough it is and in Zecharyah he also had a vision of it between two olive trees.  This is the point when I realized that what we had been told was Jewish is actually the Father's and that it is even in heaven.

It is His symbol and it is in His Temple.  How interesting that she saw the middle candle suspended in the air! The middle candle is called the Shammash candle, the Servant candle that lights all the other candles -that is Messiah!  He is the light of life!

Number One: The Menorah is the Father's.

"I am going to bring my servant, the Branch.  See, the stone I have set in front of Joshua! There are seven eyes on that one stone, and I will engrave an inscription on it,’ says YHWH EL SHADDAI, ‘and I will remove the sin of this land in a single day." -Zekaryah 3:8,9

"since the seven eyes of YHWH that range throughout the earth will rejoice when they see the chosen capstone" -Zekaryah 4:10

Number Three: The Menorah is represented by us also!

The revelation of number three came to me while I was bowing in prayer with my hands lifted up to the Father.  The vision that Zecharyah saw of the two olive trees on either side of the Menorah represents us both physically and spiritually.

When we are bowed in prayer with our hands lifted up on either side of our head, our arms represent the two olive trees and our fingers the leaves that are for the healing of the nations!  Our hands are meant to serve others!  When we use our ten fingers to follow the ten commandments we are serving both YHWH and one another! Havon (Revelation 11:4) states that the two olive trees on either side of the 7 branched Temle Menorah are also candlesticks making the Chanukkia 9 branched Menorah of Temple Rededication!

When sharing at a Chavarah Fellowship, a young woman came up to me with a picture she had drawn of the revelation I shared -here is that picture.

Our head has seven orifices just as the Temple Menorah has seven holders.  We have two eyes, two ears, two nostrils and one mouth.  Each is a gate to allow the King of Glory to come in!  We are to see, taste, hear and smell that YHWH is good and HIS WORD good.

Lift up your heads, O ye gates; and be ye lift up, ye everlasting doors; and the King of glory shall come in. -Tehillim (Psalm) 24:7

Oh Taste and See that YHWH is good, blessed is the man who trusts in HIM. -Tehillim 34:8  Who have tasted the goodness of the WORD of YHWH -Hebrew 6:5  Now that you have tasted that YHWH is good-Kepha 1 (1 Peter 2:3)  How sweet are YOUR WORDS to my taste, sweeter than honey to my mouth. -Tehillim 119:103   “Therefore, hear the word of YHWH. I saw YHWH sitting on His throne, and all the host of heaven standing by Him on His right and on His left. - Malekim 1 (1 Kings) 22:19

(Paul Turns to the Gentiles) The next Sabbath nearly the whole city assembled to hear the word of YHWH. -Ma'aseh (Acts) 13:44
“Your oils have a pleasing fragrance, Your name is like purified oil"   -Shir Ha'shirim (Song of Solomon) 13:6
His shoots will sprout, And his beauty will be like the olive tree And his fragrance like the cedars of Lebanon. Hoshea (Hosea) 14:6
For we are a fragrance of Messiah to YHWH among those who are being saved and among those who are perishing  - Qorin'tiyim 2 (2 Corinthians) 2:15

So the card that had the number for the olive trees that I had set next to the Menorah set me on a journey to Mt. Dora  that led me eventually to see Zecharyah's vision as it relates to us! There is more!

Mountain represents 'a head - looking up'.

Lift up your heads, O ye gates; and be ye lift up, ye everlasting doors; and the King of glory shall come in. -Tehillim (Psalm) 24:7

Notice that many givings of the Word in the Bible occured on mountains. Two are when the law was given to Moses and whenYahshua gave the beattitudes.  [Shemoth (Exodus) 3, Mattithyahu (Matthew) 5-7, 17]

HE IS CALLING US TO RETURN TO HIM.  WE HAVE BEEN SCATTERED.  THE OPPRESSOR HAS TRIED TO SAY TORAH IS NO MORE.  THAT IS A FLAT OUT FALSEHOOD.  JUST AS HE SHOWED ZECHARYAH THROUGH THE VISION OF THE MENORAH AND THE OLIVE TREES HE IS NOW SHOWING US THE SAME VISION.  MAY WE FOREVER HEED HIS CALL TO RETURN TO HIM.  HIS WORD ENDURES TO ALL GENERATIONS.

"Aaron is to tend it continually from evening until morning before YHWH outside the veil of the testimony in the tent of meeting. This is a permanent statute throughout your generations." -Wayyiqra 24:3

THIS IS A PERMANENT STATUTE.

On March 3 2012 I wrote that I bought two olive trees on February 29 a Wednesday.  It was a divine appointment.  I had the peoples’ business card on my jewelry box next to the menorah.  The Torah portion that week on olive trees representing peace and oil.  Lamps of wise virgins are patient endurance.  I knelt in prayer with hands in air and received a revelation from Ruach haQodesh- arms represent the olive trees and the fingers are the leaves while the hands are the branches.  The head inbetween is the menorah with seven entrances for oil of the Ruach HaQodesh- 2 ears, 2 eyes, 2 nostrils,  1 mouth.  Zechariah 4:1-14  I felt the olive trees were witnesses to a new work and season in my life. Two anointed servants and 7 eyes of YHWH.  We see hear taste and smell that YHWH is good.  Our two arms and hands serve Him and are anointed- a picture of us. Revelation 11:3.

With great love for our Father!

~REVELATION OF MENORAH BY LESLIE ANN

The following week the young woman who drew the pictures then as the Holy Spirit inspired her drew this Menorah representing us all together and looking as though tongues of fire are upon our heads as Ma'aseh (Acts) speaks of and also the flower.  Notice the other end looks as the burning bush Moses saw!  And see how the flower petals resemble the tongues of fire-on the end of the branches are the FLOWERS which burned the OIL.  BY MY SPIRIT SAYS YHWH OF HOSTS -Zekaryah 4!!

THE RESEMBLANCE IS AMAZING! 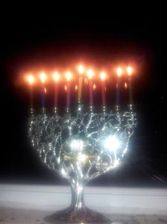 Be on the look out for more teaching on the Menorah.  I'll ask this:  Did you know there are picture symbols of Menorahs throughout the Bible???  For example beginning in the VERY FIRST VERSE OF BERESHIT (GENESIS) 1:1 there is a Temple Menorah!!  The Hebrew transliteration of verse one goes:

Bereshit (In the beginning) barah (created) Elohim (God) *EHT (ALEPH AND TAV) HasShamayim (the heavens) **w'aeht (and) ha'aretz (the earth).

* EHT (ALEPH AND TAV) Messiah said in Hazon (Revelation) 1 that He is the Aleph And Tav- the beginning and the end.  Notice that Aleph is the first letter of the hebraic alephbet meaning Strength, Leader; Tav is the last letter of the hebraic alephbet meaning Seal, Mark, Covenant!  Now it doesn't stop there!  Now when observing the hebrew letters in the word transliterated EHT- the middle letter is the **WAW!- The letter that is the picture of a nail and means to add to, secure! -The letter that represents Messiah who was pierced for our transgressions and nailed our sins to the stake and adds to and secures us to the Aleph- The ALMIGHTY YHWH by way of the Tav- the Covenant!  Now get this because it doesn't stop there! Going back to the seven letters that make up the first  verse of the whole Bible.  Notice that the Aleph And Tav word is the FOURTH/MIDDLE word.  We have already seen that the fourth word represents Messiah!  And now we see that the very position is the same as the position of the Shammash (Servant Candle) of the seven branched Temple Menorah!

WITHIN THE VERY FIRST VERSE, THE FIRST LINE, THE FIRST SENTENCE OF THE BIBLE THE MENORAH IS PICTURED AND SHOWS US MESSIAH!!!!

Study to show yourself approved unto YHWH rightly dividing the Word of Truth.  Search the scriptures and see that His ways are the best ways to live.  He Who created us in His image loves us very much and gives us His very best!  He put so much into the design of everything -FOR US!  The enemy has tried to keep His people from knowing it and accepting it because therein is the path to Him through THE WAY!  May we not follow the traditions of men, but rather MAY WE UPHOLD THE FATHER'S COMMANDS!  LET US FOLLOW THE RULES OF HIS KINGDOM AND BE CITIZENS OF HIS KINGLY RULE! THE MENORAH REPRESENTS REDEDICATION & REVIVAL TO YHWH's WAYS!  LET US BE HIS BODY, HIS TEMPLE BURNING WITH THE LIGHT OF HIS SON BY HIS SPIRIT THEREBY BEING ABLE TO WORSHIP HIM IN SPIRIT AND IN TRUTH! "Oh house of Jacob! Come let us walk in the light of YHWH!" Yeshayahu (Isaiah) 2:5

**(Modern Hebrew uses a V, Vav instead of the Ancient Hebrew which it is a W, Waw)